Achtung! Cthulhu is a World War II setting in which the heroes fight against conspiracies from the depths of time and a nightmare alliance of science and the occult. 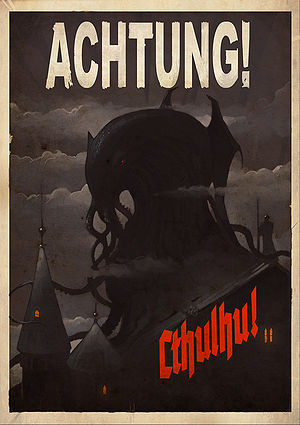 Realms of Cthulhu and the Savage Worlds core rules. The local gaming library has a stack of Explorer Edition book, so it's not yet decided if the Deluxe rules will be used.

The "Slippery Slope" play style will be used. This means pulpy damage and gritty sanity rules.

This is a standard setting rule in Realms of Cthulhu, but it's worth mentioning as warning to new players!.

Any time a player rolls snake eyes, they may spend no further bennies on the roll in question. This rule reflects the fact that the cosmos does not always favor the fortune of the investigator.

Character creation is described in the Introduction chapter of Realms of Cthulhu. Prospective players should take note of the following changes:

This is the Escape from Innsmouth campaign set in Catalonia during the Spanish Civil War. It can be played using Realms of Cthulhu before the Achtung! Cthulhu rules are published.

Published scenarios include Escape from Innsmouth and Raid on Innsmouth. Imboca, an insular fishing village in Catalonia, takes the place of Innsmouth. This is of course reference to the movie Dagon.

A return to duty for the heroes of Stalingrad is probably inevitable once the Guide to the Eastern Front is available.