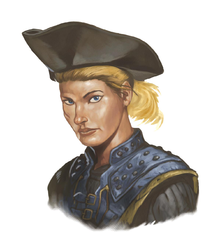 A slight but powerful woman who has worked as a captain on small ships darting about around Sasserine, Amella knows all the tricks of the trade. Now first mate of the Sea Wyvern and cohort of Peter Blood, Amella seems to be progressing out of a sordid past.

Amella Venkalie is a slight but powerful woman with fine blonde hair tied neatly back from her forehead, Amelia dresses to fight and sail rather than to please the eye. A thin scar graces her right cheek. Amelia is rather foul-mouthed, fond of uttering oaths only heard in the worst dockside taverns. Confident, haughty, and astute, she does not suffer fools gladly. She makes few attachments, having buried one husband—a dashing sea captain named Heldram Flashwell. They once ran a smuggling operation some distance from Sasserine, but were betrayed by a group of shifty gnomes led by a treacherous cur named Shortstone Badgewell — it was this cruel gnome who murdered her husband. This event has left Amelia with a poor opinion of gnomes. She makes friends slowly, but once someone has earned her trust, she's quite loyal despite her carefree attitude.