Join the forces of Rome and battle through the ages against her enemies. Discover the terrible secrets left out of the history books. Save your shieldmates. Save the Empire.

Weird Wars Rome is a Savage Worlds setting and campaign book for adventures of violence and horror in the ancient world.

Map of the Roman Empire in 125 during the reign of emperor Hadrian. 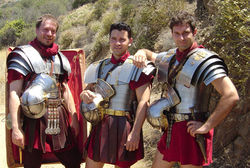 Join the legions, see the world, travel to foreign places, meet interesting and exotic people, and disembowel them.[1]

Furor Germanicus ("The Fury of the Germans") takes place in Germania during the Germanic Wars of 166-180. The heroes are Roman legionaries stationed along the Limes Germanicus, the fortified border that protects the Empire from the barbarian hordes. One of the players must shoulder the burden of command and play a decanus or tribunus.

A selection from the War Master's library: