Way of the Wicked

Way of the Wicked is an adventure path by Fire Mountain Games for the Pathfinder roleplaying game. The local campaign was played from March 2012 to October 2013, and ended with the villains as tyrants of Talingarde. 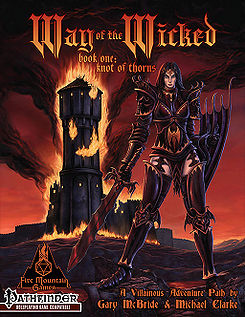 Cover of part one.

The villains and their minions.

Cheliaxian native. Dark hair, sallow skin. Belligerent and stubborn to the point or rudeness. Born to a merchant family in Cheliax and raised to be patriotic, dependable and a worshiper of infernal powers. Imperia's family are slave traders by profession and it was during a mission to pick up a new batch of thralls that she met Brodus and was apprehended by local authorities. Since Talingarde once was a Cheliazian colony, Imperia does not recognize the so-called authorities much less the independence of the island. To her they are not only insolent and insipid but also rebels and insurrectionists. When an opportunity presented itself for her to swear formal allegiance to Asmodeus and to punish the traitorous islanders, Imperia jumped at the chance.

She is a blue eyed, fair skinned redhead with an enchanting smile. About five feet tall and a body to kill for. Born into a noble family of Talingarde she was early destined for marriage. Her early years was spent developing social skills. As she entered puberty she was wed to a lord in exchange for a quite big dowry. Resenting being "sold" and quite annoyed with her new husband Ruby tried to poison him. The Lord Fellyr survived and had her thrown in jail to be executed. So when she got a chance to get revenge on the society that she feels abandoned her, especially her family who didn't intercede on her behalf when sentenced to death. She is a sorcerer with a love for explosions and fire, it seems as red dragon blood run in her veins.

Brodus is an Iraen barbarian warrior from Caer Bryr. He was arrested for slave-taking.

Ned seems to be the dependable nice guy you gladly would trust the care of your life savings or your daughters. He is of average height and build, fair hair and a displaying a well-trimmed mustache. Abandoned as a toddler and raised on an orphanage, Ned learned to cope with his surroundings the hard way. Lacking the body needed for successful brawling he had to rely on his cunning: he seldom got into trouble, he was controlling it. The path of the charlatan was the logical choice, not really for the money but for the power rush of getting a rich man to hand over his wealth and thanking you for it.

These rules are in addition to those in the player's guide.

The traits rules from the Advanced Players Guide are used. Characters start with two traits. One of these must be a crime trait from the Adventure Path.