Black Library has announced the Warhammer 40,000 Roleplay game, to be released in March 2007, later changed to September 2007 and recenly February 2008. This page contains offical information and rumours about the game.

MARCH 14 2006 (Nottingham, England) 2007 will mark the 20th anniversary of the first publication of Games Workshop’s legendary Warhammer 40,000 game system. It’s no coincidence that March 2007 will also see one of the most eagerly awaited events in gaming history – the release of Warhammer 40,000 Roleplay (40KRP)! Rumours have been circulating in the roleplay community for many years about such a game. Now Black Industries, fresh from the success of the revamped Warhammer Fantasy Roleplay, can reveal that it really will be happening, and in a way no one is expecting. Because there won’t be one 40KRP game, but three!

Warhammer 40,000: Dark Heresy will be the first 40KRP game, allowing players to take on the role of an Inquisitor’s retinue. Their task is to uproot the taint of Chaos in Imperial society, to smash dark cults and foil sinister plots. It’s a game of investigation and will be an ideal introduction to the dark and gothic universe of the 41st Millennium. Dark Heresy is just the beginning, however. After this basic game, two further games released eighteen months apart will allow the players to progress and explore the universe first as Rogue Traders and alien pirates, and eventually experienced players will be able to roleplay the devastating warriors of the Adeptus Astartes Deathwatch.

All three games use the same game system, which is itself based in part upon the award-winning Warhammer Fantasy Roleplay. Players will be able to progress from one system to the next, as they gain experience and a measure of understanding of the vastly detailed universe of Warhammer 40,000. Each of the games will consist of a core rulebook accompanied by regular releases of sourcebooks and adventures.

For more information as it becomes available keep an Inquisitorial eye on www.blackindustries.com. But remember, heretic: innocence proves nothing. 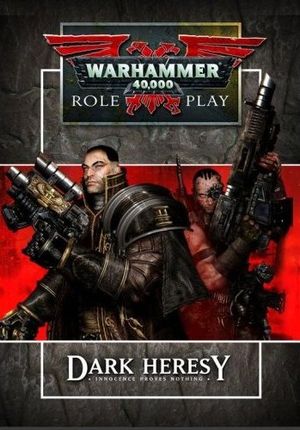 All three games will be 100% compatible, offering new and increasingly advanced rules as each new game appears.

Players are Space Marines from the Astartes on secondment to the Deathwatch or Grey Knights, formed in small, high power bands rooting out heresy and free to roam far from battlefields (unlike regular Space Marines).

Warhammer 40,000 Roleplay ("40KRP") will use rules similar to those in the second edition of Warhammer Fanatasy Roleplay ("WHFRP2").