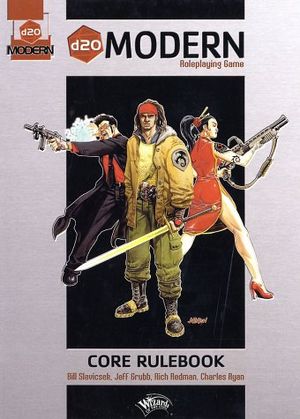 The d20 Modern rules on this site have been tweaked to make them more like version 3.5 of the d20 System. This will hopefully make it easier for players to switch between Modern and D&D games. A suitable name for this variant rules set is d20 Modern Evolution.

The Evolution rules update the Modern SRD to d20 System version 3.5. Only game mechanism that are shared between d20 Modern and the d20 System should be changed. Some additional OGL rules, such as extra talent trees, may be incorporated into the rules.

Setting specific rules, such as Horror classess will belong to separate categories.

The MSRD: prefix can be used for interwiki links.