Amazing Jungle Adventures is a pulp miniature game using 28 mm figures where each player take control of a late 1930ies pulp hero and try to stop villains, hidden in a secret jungle base. It will be held at LinCon gaming convention in 2012. The game will have a base with two or three houses, a suspension bridge, an air strip, airplanes, lots of miniatures and an endless amount of missions to be carried out by players.

Discovering several historical artifacts of Central American origin being sold and the money being used to buy ammunition, fuel and advanced technical parts, some archaeologists got suspicious. They were members of a group of heroes called "The Guardians" and decided to investigate further. What they found led them to believe that someone was constructing a doomsday device. They gathered all pilots of "The Guardians" and sent them flying over the jungle to search for clues, and sure enough, when approaching two mountains while flying along the edge of a lake in the Central American republic of Hildalgo, an aircraft was fired upon by an anti-aircraft gun. It evaded any direct hit, but heavily damaged it returned home without really finding out anything, except for a location.

The game will have a continuous flow where a player choose a character and depending on the character he/she will arrive in an aircraft on the airstrip, by an amphibian aircraft landing on the beach, as a passenger in an aircraft or in a few cases may come through the jungle. Characters may enter in an ongoing game whenever there's a player, in true drop-in style. They just get a mission, their initiative cards is added to the deck and the game continues. 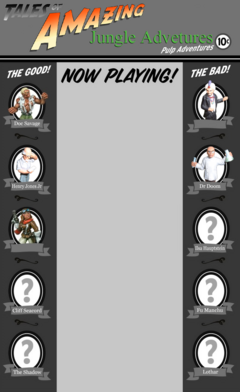 There will be missions or plots pre-made on cards and some might be improvised during play. Plots will have hooks that serve to catch the eye of a hero and a level of difficulty. The more difficult, the greater the reward. There will be a series of missions that gives an over all story arc. There might also be character specific missions. Perhaps the villains could have real-time triggered events. Example: Zeppelin arrives three hour after game start with parts for a doomsday device. If shot down, an expedition will try to recover parts. After arrival and an additional three hours of uninterrupted work the doomsday device would be ready.

Meanwhile, in the Jungle...

There will be a lake shore, two mountains with a suspension bridge in between, an AA-gun at the top of one, a secret base, the very end of an airstrip with an open area to park planes, cars and trucks and the rest covered by jungle.

In the jungle there will be a secret base. The base is a hide out in the jungles of Central America for a pulp villain. It will have a launch ramp for an evil device, about two houses and some wooden bridges connecting them to the road and each other. I'm thinking wooden houses on poles with balconies almost all around. Detachable roofs makes it possible to continue game play inside.

On the top of one of the mountains there will be an AA-gun. From that a road will lead to the base and the airstrip across the suspension bridge.

Only the very end of the runway will be in the model, but there will be an area where you can park the aircrafts and where cars and trucks can be parked. There will be a wooden house and/or possibly a shed.

It would be so cool to include a zeppelin in the game, but I would want it to be huge. At least one and a half meters or preferably two with a width of almost half a meter. It will have to be light weight and have some way to suspend it. I'm thinking making the surface out of cardboard with Styrofoam structure inside fixed to a PVC tube straight through the center. It would also be possible to use to suspend it. In the question of shape, would octagonal be enough to get the zeppelin hull shape?

The cabin might be built out of cardboard and foam-board. It would be nice if it would be possible to detach and use separately for indoors combat or the likes. I should probably make two or better four engine gondolas for propulsion. Those might be made out of cardboard or Styrofoam.

I have models of the following aircraft:

The flying boats that have retractable landing gear will be modeled with it retracted. I will make bases for them and those with floats, that is high enough so that the base's surface will be at the waterline of the flying boat hiding the plane below the waterline. This might not look perfect, but at least the planes will be stable. I will hopefully remember to put in weights in the models to make sure they are balanced enough to not tip backwards.
The aircraft with fixed landing gear will of course have the landing gear out, but so will also the Electras, the Skyrocket and the Shinden which all have retractable landing gear.
All aircraft will be painted in paint schemes according to some fictional crafts, civilian paint schemes or a non-militaristic historical paint scheme.

I have also bought this:

It will be a secret weapon with some kind of doomsday device that will be the means for total world domination.

These are the characters I'm thinking could fit. Now I only need to buy and paint all the miniatures for them, and make character cards with all skills and other statistics.

There will be several heroes that the players may choose from. Anything from a strong hero to a slick flyboy or a beautiful dame. All will have a name, a picture, some background and gaming values on a card in the size of a collectible card game card. I will name most of them after famous pulp characters to make it easier to quickly get a hang of the character. Some will be movie heroes, some will be book heroes or comic book heroes and there might even be an old RPG character.

The main villain plans to rule the world, perhaps through starting a second great war and rise from the ruins, or perhaps through some nefarious device. There will be opportunities to play a villain if someone wants to, but not from the start.

There will be goons that will be guards, gang members or perhaps handymen working for the villains. They will have a single card representing all of that type and usually be much less of a threat than all others.

There will mission cards that have all information needed. It will be noted if it is a personal plot, a main plot or a plot twist. There will be a text describing the mission, a reward it will give on completion and possibly there might be a small photo of an important item of character. Plot twists can be played when a player completes a plot allowing another player to continue the same plot.

The rules below is written specifically for the game and was made in a try to allow for quick play. There will be an iPhone-app available for download with the rules and helping the player to keep track of their character(s) and their advancement.

Each character is assigned color and a value and two playing cards are added to the initiative deck as the player joins the game and removed if the player leaves or the character dies.

There are a few skills that all characters have but only at 7. These are the standard skills. There are also special skills that might not be as useful in a fight but give life to a character. If a character specifically have a skill it's at 15. A skill roll is handled by rolling a twenty sided die and rolling equal to or less than the skill, but the lower the roll the better the success.

Most movement uses the standard game cards for measurement. The only exception is flying vehicles. Depending on the terrain, you use the length or width of the card. In the game only the roads, the beach and the airfield will allow for the length. The hills and the jungle will use the width. If a character is prone he/she can stand at the cost of all movement that round.

A red entry means that the vehicle sways wildly. All passengers loose their next action. Anyone clinging to the side or roof of the vehicle must succeed in an acrobatics skill roll or fall off.

Aircrafts entering play may land and move to where they want to stop as a single move and characters can exit and act the next move. If continually flying, the aircraft will move at least one meter if maneuvering and up to tens of meters depending on speed. Any manned Anti-Aircraft Gun or character prepared to fire at flying vehicles may fire at the aircraft at any time during the movement. If a flying stunt is tried, roll a drive skill check. Failure means that the aircraft didn't fly as low as wanted or pulled up before flying below the bridge. Only a fumble means crashing.

Combat is handled by a roll of one twenty sided die and the use of the row of numbers per attack that is listed on the character's card. Effect will be color coded and each card show how much color coded damage the character can take. When a color is filled it overflows to the next. In close combat or melee the attacked character may strike back if able.


Cover in ranged combat protects from green results. Not much of an effect but real heroes don't use cover.
Running lowers the effect of a hit from ranged combat one color and is a kind of defense.

There will be heroics cards that either is associated to a special character or that can be drawn or rewarded when completing a mission.

Even villains have special powers that could be represented by cards.

If a fumble is rolled something bad happened. Roll a die and consult one of the tables below depending on what type of combat and read as a d10 for pistols or unarmed combat and a d10+10 for melee weapons and rifles. Fumbles using skills usually don't cause that bad fumbles and are decided by the Gamemaster as the occur. The tables below are only to be a help to the Gamemaster. If there's an obvious effect, don't feel restricted by the tables below.

Jam: Gun can't be used until a successful mechanics roll is made to repair it.

If a character successfully completes a mission or just survives for a period of time it may get experience and improve a skill or get a Heroics or Villainy advantage that may aid in New Adventures of the Same Character.