Amazing Adventures at the Gold Monkey

Amazing Adventures of the Gold Monkey is a pulp miniature game using 28 mm figures where each player take control of a late 1930ies pulp hero or villain and try to complete their missions. It will be held at LinCon gaming convention in 2013. The game will have a village with two or three houses, a suspension bridge, an air strip, airplanes, lots of miniatures and several missions to be carried out by players.

It's perilous times and storm clouds are gathering. Japan is at war with China.   In the U.S.A. the Depression is still on.  Franklin Delano Roosevelt is President.  The population is about 127 million.  Wrong Way Corrigan flew to Ireland.  Howard Hughes flew around the world in under four days.  The Yankees won the World Series in four straight over the Cubs.  California beat Alabama in the Rose Bowl.  Mount Everest is still unclimbed.  Hilter has entered Austria.  A nazi hidden base was discovered in the Central American republic of Hildalgo. (LinCon 2011)

There will be missions or plots pre-made for most characters, and some might be improvised during play. There will be a series of missions that gives an over all story arc. Perhaps the villains could have real-time triggered events. Example: Zeppelin arrives after dinner break, with parts for a doomsday device. If shot down, an expedition will try to recover parts, etc.

The Marivellas is a South Pacific volcanic chain consisting of hundreds of mysterious and tropical islands. Within this chain we might find any known species of animal and a few unknown ones. The tribes inhabiting the islands are equally varied, ranging from African pygmies to beautiful Amazons.

The islands are split into two territories: the northern half is a Japanese mandate and the southern half, French. The key ports in the French section of the islands are Tagataya and Boragora. Tagataya (the larger of the two) is approximately four hours by plane and 48 by boat from Boragora. The China Clipper stops briefly at Tagataya and overnight at Boragora on its flight from Hawaii to Hong Kong.

There will be a beach, some mountains with a suspension bridge in between, the very end of an airstrip with an open area to park planes, cars and trucks, a dock, some one-story buildings including one serving as a church. There's also the Monkey Bar, but that's another story. The rest is covered by jungle.

This two-story structure, famous for its wood-carved monkeys climbing all over the front and back bar, has the only accommodations in Boragora, several rooms on the second floor with doors to both an exterior colonnade and a balcony in the bar. When the China Clipper lands each Wednesday (it flies East one week and West the other), the Monkey Bar is filled with passengers from the flight, the people ranging from Europeans to Orientals... from business travelers to wealthy tourists, and, of course, mysterious strangers. When the Clipper isn't in port, the Monkey Bar is jammed with locals: natives, sailors, expatriates from all corners of the globe.

Electricity for the Monkey Bar and a few other buildings is supplied by a gasoline generator at the rear of the structure. There are no telephones... the only communication with the outside world is via shortwave radio or mail.

Meals are served both in the bar and on the exterior porch overlooking the Boragora waterfront.

I'm thinking wooden house with balconies almost all around. Detachable roofs makes it possible to continue game play inside.

From the beach wooden docks stretch out into the bay allowing boats and amphibious aircraft to dock.

Only the very end of the runway will be in the model, but there will be an area where aircrafts can be serviced and boarded and where the island's few cars and trucks can be parked. There will be a wooden warehouse and possibly a shed.

It would be so cool to include a zeppelin in the game, but I would want it to be huge. At least one and a half meters or preferably two with a width of almost half a meter. It will have to be light weight and have some way to suspend it. I'm thinking making the surface out of cardboard with Styrofoam structure inside fixed to a PVC tube straight through the center. It would also be possible to use to suspend it. In the question of shape, would octagonal be enough to get the zeppelin hull shape?

The cabin might be built out of cardboard and foam-board. It would be nice if it would be possible to detach and use separately for indoors combat or the likes. I should probably make two or better four engine gondolas for propulsion. Those might be made out of cardboard or Styrofoam.

It would be nice to build a u-boat (Wurrfler U26) and have Oskar Schomburg command it.

I have models of the following aircraft:

The flying boats that have retractable landing gear will be modeled with it retracted. I will make bases for them and those with floats, that is high enough so that the base's surface will be at the waterline of the flying boat hiding the plane below the waterline. This might not look perfect, but at least the planes will be stable. I will hopefully remember to put in weights in the models to make sure they are balanced enough to not tip backwards.
The aircraft with fixed landing gear will of course have the landing gear out, but so will also the Electras, the Skyrocket and the Shinden which all have retractable landing gear.
All aircraft will be painted in paint schemes according to some fictional crafts, civilian paint schemes or a non-militaristic historical paint scheme.

These are the characters I'm thinking could fit. Now I only need to buy and paint all the miniatures for them, and make character cards with all skills and other statistics. 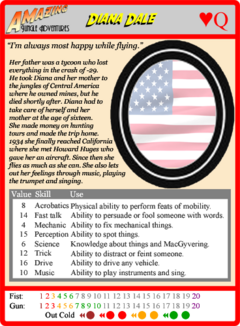 There will be several heroes that the players may choose from. Anything from a strong hero to a slick flyboy or a beautiful dame. All will have a name, a picture, some background and gaming values on a card in the size of a collectible card game card. Most of them will be from the tv-series Tales of the Gold Monkey, but there will be other well known pulp heroes that could be fitted into the story.

There might be goons that will be characters with a smaller role in the plot. They will be easier to knock out and will have a single card representing all of that type and usually be much less of a threat than all others.

There will mission cards that have all information needed. It will be noted if it is a personal plot, a main plot or a plot twist. There will be a text describing the mission, a reward it will give on completion and possibly there might be a small photo of an important item of character. Plot twists can be played when a player completes a plot allowing another player to continue the same plot.

If a character successfully completes a mission or just survives for a period of time it may get experience and improve a skill or get a Heroics or Villainy advantage that may aid in New Adventures of the Same Character.