This is a compilation of weapon tables and descriptions.

Melee weapons, can be used to attack foes within reach of the weapon. A melee weapon with the heavy thrown or the light thrown property counts as a ranged weapon when thrown and can be used with ranged attack powers that have the weapon keyword. 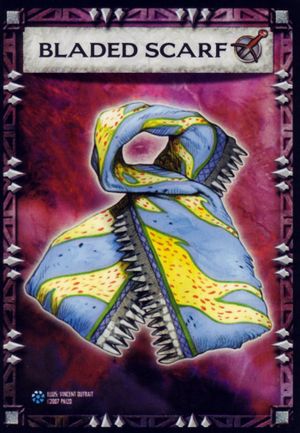 Bladed Scarf
(Unofficial) A scarf reinforced with fine metal chains and with hidden blades at either end, this is a very versatile if low-damage weapon. It has a weapon mastery path. In Greyhawk, this weapon is used by the Rhenne.

(Unofficial) The blunderbuss is a two-handed firearm with a wide, sometimes flared barrel. It is can be loaded lead shot, nails or even coins, and these can hit several targets (burst 1). The weapon takes a long time to load, and must be reload out of combat. It takes ten charges of gunpowder and bullets to reload a blunderbuss. This weapon can be used to represent the blunderbuss used by coachmen in the Empire of the Old World, or Patrick Harper's seven-barreled gun in the Sharpe books.

Error creating thumbnail: Unable to save thumbnail to destination
Bola

This weapon consists of a set of two or three weighted spheres connected by cord. When thrown, a bola tangles up opponents, but its spheres are also strong enough to inflict injuries. This weapon has a mastery path dedicated to it.

This stout, wide-bladed weapon lacks the accuracy of a longsword, but what it lacks in accuracy, it redeems with deadliness.

(Unofficial) The buckler is used as a shield, but is too small to offer the full benefits. It can be used to punch. If you are proficient with a light shield and with the buckler, you can use powers and feats that require a shield with the buckler.

(Unofficial) This weapon is a thin cane which can be wielded much like a rapier or smallsword, and is sometimes used in fencing practice. It is a fashion accessory which can be used for defense or when thrashing ruffians. A cane can conceal a smallsword; such a weapon is known as a swordstick or cane-sword. This is mainly a way to smuggle a blade where they are not allowed, but also a way for a gentleman to be prepared without sacrificing style.

(Unofficial) A carbine is a short muzzle-loaded, smoothbore blackpowder handgun, which is intended to be fired from the shoulder. Cavalry prefers this weapon over the musket because its compact size. It can be used by a small character.

(Unofficial) This weapon is typically a sharpened ring used for throwing, but it can cover a variety of throwing weapons such as the mongwanga.

This dwarven hammer has a heavily weighted head, making it resemble a one-handed maul backed by a deadly spike.

(Unofficial) This is short broad-bladed sword. The blade is balanced like an axe, with all the weight at the front end. The butterfly sword and dogslicer have the same game effects.

Fitted with an axe head at each end, a double axe offers increased offensive and defensive capabilities.

This weapon has a spiked flail head at either end to maximize attack and damage.

This well-balanced weapon combines the deadliness of two longswords with increased defensive capability.

A duelling pistol is a similar to an ordinary pistol with a rifled barrel and improved sights, which gives it greater accuracy and improved range.

This broad-bladed axe is heavily weighted for greater hewing power.

This enormous, two-handed sword is favored by fighters and paladins.

This spadelike weapon has a long haft with a handle on the end. The head is a wide, double-edged blade with a stabbing point at the top. Some gouges are fitted with a strap or a harness, making the weapon easier to carry.

This massive, recurved bow stands as tall as a human when strung, and it fires arrows with greater power than a traditional longbow. Only certain cultures can produce weapons such as this.

This reach weapon resembles a longspear, but its broad head and strong haft allow it to strike with increased force.

This sturdy weapon is identified by the crescent-shaped curve at the end of its blade. 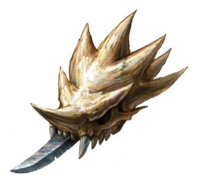 Klar
(Unofficial) The Klar is a spiked gauntlet made out of the skull of a tusked animal with a blade poking out the mouth. It is used as a defensive weapon. The skull gets damaged with use and needs to be replaced regularly, so this is a good place to show off a recent difficult kill.

The blade of this heavy knife curves forward for greater potency. A rogue proficient with the kukri can treat it as a dagger for the purpose of the Rogue Weapon Talent class feature.

(Unofficial) The lance is made to be used mounted. It adds +1[W] damage to the first attack on a mounted charge.

(Unofficial) This is the unarmed attack of a trained martial artist. The martial strike can be used with any power that requires any specific type of melee weapon except pole arms.

When using martial strike, you can use the magical abilities of any one melee weapon you carry and are proficient in. You need not be wielding this weapon, but must be carrying it. Changing which carried weapon gives you a bonus is a minor action.

A Monk can make unarmed attacks with much greater effectiveness than most other combatants can. Monk unarmed strike can be used to make basic melee attacks. You must have a hand free to use monk unarmed strike, even if you're kicking, kneeing, elbowing, or head-butting. It can benefit from a magic Ki focus.

First used by dwarf shock troops in battle against giants, this oversized two-handed hammer has a massive head studded with spikes.

(Unofficial) A musket is a muzzle-loaded, smoothbore blackpowder handgun, which is intended to be fired from the shoulder.

This net consists of a web of rope or cord fitted with heavy weights. A trailing cord enables the wielder to control entangled opponents. This weapon has a weapon mastery path dedicated to it.

This narrow dagger features a specially designed guard that can deflect attacks. A rogue proficient with the parrying dagger can treat it as a dagger for the purpose of the Rogue Weapon Talent class feature.

(Unofficial) A pistol is a simple blackpowder weapon fired by a spring mechanism. It is about one to two feet in length and can only be hidden under a robe, greatcoat or similarly voluminous garments.

Errata: The weapon is no longer a superior military weapon. It is instead a military melee weapon.

A rectangular magazine attaches to the top of this crossbow. A double-action lever drops a bolt into place as a free action, then fires it as a standard action. A repeating crossbow does not need to be reloaded as long as it has ammunition in its magazine. A magazine costs 1 gp and holds 10 bolts. It takes a standard action to remove an empty magazine and load a new one. The repeating crossbow has a weapon mastery path dedicated to it.

(Unofficial) The long rifle has longer range and greater accuracy than an ordinary handgun. It requires more training and maintenance, and is mostly used by hunters and elite military units.

The small sword or (also known as a court sword or dress sword) is a light one-handed sword designed for thrusting. It is shorter and lighter than the rapier, and it is often considered a fashionable accessory rather than a weapon. A smallsword can be hidden inside a cane; such a weapon is known as a swordstick or cane-sword.

(Unofficial) The spear-thrower is a lever used to achieve greater power with a javelin, and uses javelins for ammunition.

This weapon has a weapon mastery path dedicated to it.

Error creating thumbnail: Unable to save thumbnail to destination
Starknife
(Unofficial) This weapon looks like a large shuriken with a handle in the middle. A wielder can stab with the starknife or throw it.

(Unofficial) A torch can be used as an improvised weapon. It inflicts fire damage.

This oversized flail has three heads for more potent attacks. It is associated with Gnolls and Yeenoghu, their demon lord.

Originally of dwarven make, this weapon has a heavy axe head at one end (dealing d12 damage) and a sharp spear point at the base of the haft (dealing d8 damage).

(Unofficial) A fan with sharpened metal spokes, that can be carried in almost any situation.

(Unofficial) A chain with a weighted end. It can be spun in a defensive arc or bludgeoned with. When wielding it as an off-hand weapon, it is attached to the main weapon (even to another weighted chain). This weapon has a weapon mastery path dedicated to it.

Although an impractical weapon in most hands, a well-placed whip strike can put one’s opponent at a serious disadvantage. This weapon has a weapon mastery path dedicated to it.