Evil schemes are afoot in Cauldron, a metropolis of merchants built into the caldera of a long-dormant volcano. To foil the agenda of evil cultists, your band of adventurers must brave haunted jungle ruins, slay mighty dragons, and bind themselves to a layer of the infinite Abyss. Will their swords and spells be enough to save the Shackled City? 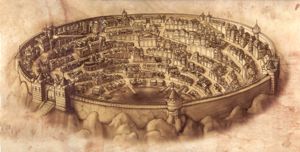 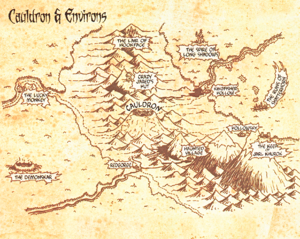 Map of the area.

This page contains some thoughts about running The Shackled City Adventure Path using the Warriors & Warlocks rules for Mutants & Masterminds.

The protagonists of the campaign are:

The events in the Shackled City Adventure Path take place in the City of Cauldron and environs. The characters will have some knowledge of the outside world, but this is essentially a Points of Light campaign. This allows the game master to develop the world at his leisure.

Note: The gods will be given names but keep their titles once the world is more developed. The setting is a D&D world even if another system is used. Cosmology and deities will have some similarities with 4th edition Dungeons & Dragons.

Their existence of the gods are not in doubt, but most cultures only worship a few deities. The gods are unaligned, but their churches are not. The Twelve Gods are worshiped (or at least recognized) by all civilized people.

Worshipers of the Old Faith include druids and superstitious folks who venerate spirits of nature. Demon worship is outlawed in all but the most evil societies.