From Hastur
Jump to: navigation, search
Golarion is the official setting for the Pathfinder Chronicles. This is a resource for local games in the setting. 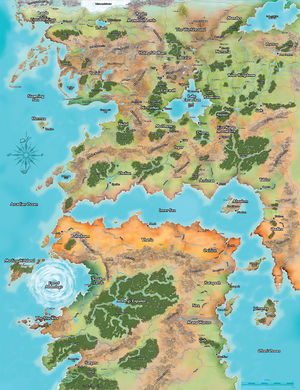 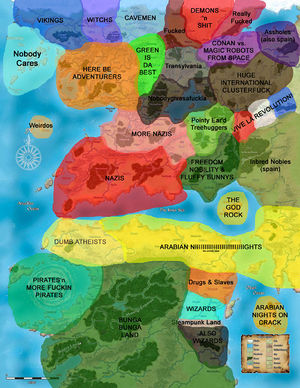 The campaign setting explained in one handy graphic

From a review of the Inner Sea Primer:

The island of Talingarde lies in the Steaming Sea far to the west of the Ironbound Islands. The Talireans are a forgotten and largely isolated colony from Cheliax who have managed to thrown off the worship of Asmodeus in the last eighty years, and now worship Iomedae. In addition to the Talireans, the island is home to the native barbarian settlers of the huge Iraen forest. Tribes of monstrous humanoids and small bands of Varki live in the savage north.

4704 AR: Talingarde is invaded by an evil army from the Savage North.[1] During the next years, the army of the bugbear warlord Sakkaroth Fire-Axe lays waste to much of the kingdom.

4706 AR: King Markadian V of Talingarde slays the wyrm Chargammon the Black when it attacks the palace, is fatally wounded. Princess Belinda flees to Absalom and begins to recruit an army.

4707 AR: Cecil, lost heir to the House of Darius, lands on Talingarde with a mercenary army. He leads his forces to victory over the the monstrous army at the Battle of Brandleburn. As revealed in the Liber Darian, Cecil is the first born of the late king Markadian V, and princess Belinda is a bastard born of a silver dragon. Cecil Darius ascends to the throne of Talingarde and takes the name Markadian VI.

4708 AR: After decades of religious persecution, freedom of worship is proclaimed in Talingarde. The formerly banned Church of Asmodeus becomes the state religion.

4710 AR: The rebel army of princess Belinda sails from Varisia and lands on Talingarde. The princess is killed when her army is defeated at the Battle of Tamberlyn.

4714 AR: In a bid to reclaim the lost colony of of Sargava, Imperia Wradoxian is appointed governor by Queen Abrogail II.[2]